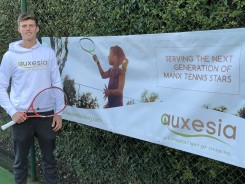 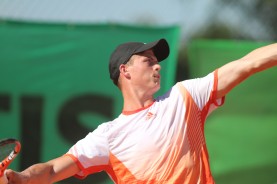 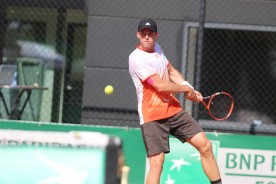 The Island’s leading tennis player will be supported again next season by a Douglas-based Auxesia.

The 2018/19 campaign will be the seventh season in a row the firm has backed the 23-year-old from Castletown as he moves through the ranks in professional tennis.

Currently ranked 641st in the world, it’s been another busy year on the circuit for Billy who has competed in numerous tournaments, including in France, Spain, the UK and Sardinia in Italy where he eliminated the fifth seed en-route to the quarter-finals and reached the final of the men’s doubles.

He also faced former British number two Dan Evans in a pre-Wimbledon challenger event in Loughborough, taking him to a tiebreaker in a straight sets defeat.

Billy, who became the first islander to win a singles match at the All England Club in 2013 when he won in the first round of the boys' singles at Wimbledon, said: ‘I am so extremely grateful to Auxesia for its ongoing support.

‘I am at an exciting point in my career and the company’s backing has played an invaluable role.

‘Not only has the financial support allowed me to focus on my training programme but the belief in me from Stuart (Colligon) and the team is a wonderful network to have.’

Stuart Colligon, Director at Auxesia, explained why the company is delighted to renew its support.

‘Since he was a young teenager, we have seen Billy develop as a player and a person. It is quite a feat to go from being the Island’s highest-ranking male tennis player to one with a world ranking.

‘When you consider that he only gained his first ranking place three years ago (he was ranked 1143 in 2015) and that he has now moved into the top 650 speaks volumes and he should be extremely proud of his achievements.

‘Auxesia has a pedigree for fostering local young talent. Billy fits that bill. He is fully committed, works incredibly hard and it’s a pleasure to help him.’