The Isle of Man’s most prominent tennis player is continuing to make his mark on the professional circuit.

Billy Harris, from Castletown, reached the latter stages of tournaments in Egypt, Thailand and Vietnam recently, with the continued support of Douglas-based management consultancy Auxesia.

The company sponsors 24-year-old Billy, who had a career high ATP (Association of Tennis Professionals) ranking of 609 last year.

He reached the quarter finals of a singles event in Sharm El Sheikh where he also reached the last 16 of the men’s doubles with his Polish doubles partner Wojciech Marek.

In Bangkok, he beat three of Thailand’s Davis Cup players en-route to the singles final to achieve a win at the TATP Bangkok Classic.

Billy, who has been travelling around the world over the past two years after joining the International Tennis Federation circuit, is encouraged by his form after an enforced time out through injury.

He explained: ‘It’s been a frustrating first part of the year and my ranking slipped a lot when I was out with my hip injury but it’s great to be back playing. The week in Vietnam was the best I’ve had since returning and I’m looking to capitalise on the high.

‘Being on the professional circuit is a wonderful way to develop and it’s made so much easier  by the continued support from Auxesia. I am so grateful for the backing of the team and to have that network in place has allowed me to fully focus on my training programme.’

Auxesia’s Director, Stuart Colligon said: ‘Billy, who became the first player from the Isle of Man to win a singles match at the All England Club in 2013 when he won in the first round of the boys’ singles at Wimbledon, has displayed a first-class attitude.

‘It is not just Billy’s obvious talent that jumped out at us,’ explained Stuart. ‘His attitude facing adversity is also a key factor in his progress and we are happy to offer a helping hand to help him reach his full potential.

‘It was great to see him do so well in Egypt and Vietnam recently and we should all be proud to see a Manx player competing, not only professionally but on the international stage.’ 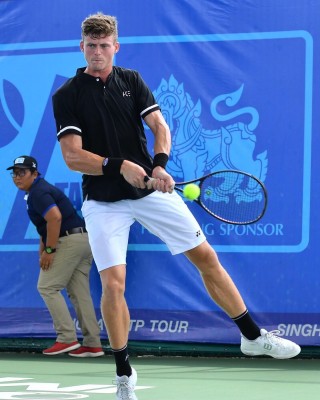